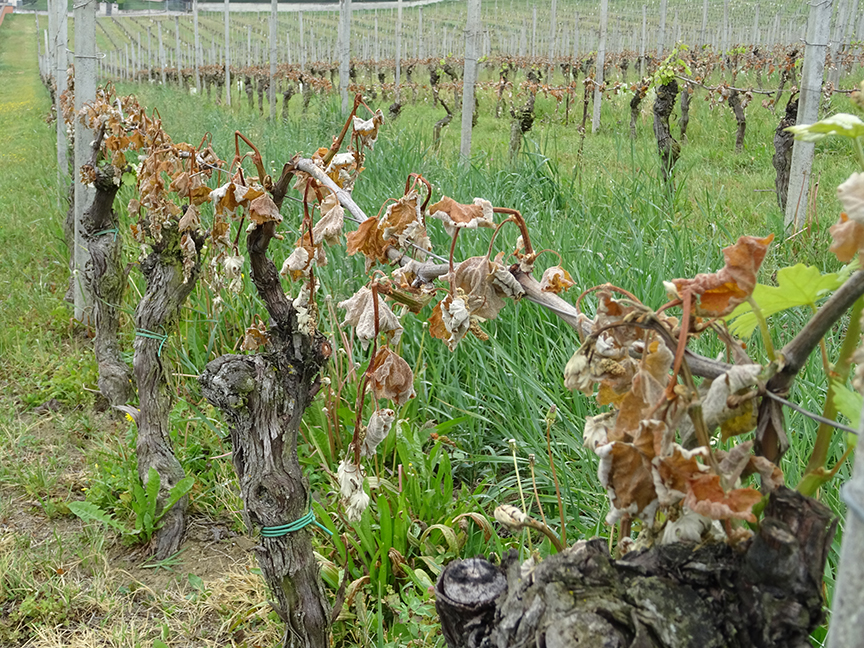 In viticulture, frost represents a considerable risk: it may cause important economic damage to the grapevine production affecting vast surfaces or entire territories (even with a single event) and the consequences may have impact on growth and yield for several seasons. The degree of injury depends on the minimum temperature reached and on the duration of exposure to a critical temperature; the rate of temperature fall can impact on the efficiency of a protection action. Critical temperatures for grapevines differ based on the growth stage: during the winter the dormant buds can resist, due to cold hardiness in endodormancy phase, temperatures below -10°C (until -20°C), but in spring all the green parts (opening buds and young shoots) can be damaged at temperatures only slightly below 0°C. Late spring frost is a significant hazard during early plant development: the susceptibility to it depends on vine varieties and the growth stages. Numerous studies have reported that the phenology of many plant species advances due to the climate change: warmer winter temperatures lead, for the grapevine, to earlier spring bud burst. Several phenological models indicate that this trend is expected to continue but, at the same time, in the future scenarios the number of frost days may decline. The risk of frost damage depends a lot on the climate region and on the location of the cultivation’s site.

Frost damage can be caused by two different meteorological phenomenon: radiative frosts (cooling of the ground surface due to infrared radiation loss at night) and advective freeze (horizontal movement of a large cold air mass), it can also happen as a combination of the two adverse events. To prevent frost damage there are both active and passive methods. A fundamental prerequisite for an effective prevention is, in general, the possibility for the winegrower to have access to timely warning services (on extreme weather conditions) based on reliable, detailed and local meteorological data.

The most effective weapon against frost damage is preventive action: site selection (location) is the most important factor that should be taken into consideration for the vineyard establishment (e.g. avoiding the inland sheltered areas, preferring mid slope sites). Other passive methods are variety selection, inter-row management, soil water management, pruning methods and training system choice; these measures, in addition to being much less costly, often eliminate the need for active methods.

The active frost protection methods include technologies, either modern or ancient, that are adopted to (temporarily) modify the micro-climate of the vineyard; any method should be chosen based on vineyard site characteristics and cost effectiveness. The oldest practice to protect vines against spring frost is heating the vineyard air, using many alternative sources; this method works best with temperature inversions and absence of wind. Currently the most common solutions adopted are candles and fossil-fueled heaters. The anti-frost candles are made of metal buckets filled with paraffin blend; the burning candles increase the temperature of the air by heating and a protective blanket of smoke prevents heat loss; to achieve effective protection, from 200 to 500 candles per hectare are recommend. The fossil-fueled heaters, not largely in use anymore, are expensive, inefficient and pollute the environment. To lower the cost of operation, heaters can be used in combination with other methods (sprinklers or wind machines).

Another common active method to prevent radiation frost is the use of devices to mix the warmer air above the inversion layer with the cooler air located around the vines: wind machines and helicopters. With advective frost these solutions can potentially increase the damage. The choice between the two depends on the frequency of frost events. Wind machines (fixed vertical and horizontal fan systems) have a high capital cost and are preferable in locations with higher probability of spring frosts. The effectiveness of the method of mixing air layers is critically dependent on their ability in accessing warm air from higher levels; if the inversion is weak, the protection is insufficient.

The exploitation of the energy released when the liquid water freezes (latent heat) provides the most reliable protection in both advection and radiation frost conditions. The oldest method is the use of over-vine sprinklers system where a large volume of water is sprayed on the plants. A constant liquid water is needed to form a freezing coating around vines buds and shoots; as freezing of the free water continues, latent heat is liberated, maintaining the boundary at a temperature of 0°C, a temperature tolerated by vines. It is important avoiding ice freezing on the vines between the periods of sprinklers rotations: high frequency of application or high intensity guarantee better protection. In order to determine the timing of sprinklers turning on and off, the use is suggested of Wet Bulb temperature measures (in case, estimating it by temperature and humidity measures). In modern systems, sensors positioned in the vineyard can provide this information. In vineyards, much of the considerable quantity of water used in traditional overhead sprinkler systems falls on non-target areas. With micro-sprinkler technology, (specially sprinklers designed to target the vines only, called “Flippers’) it is possible to provide good protection and save up to 45% of water.

There are several products on the market (natural and synthetic products e.g  glycols, oils, resins, sugars, mineral salts etc.) claimed to improve frost tolerance in treated plants. To date, there is contrasting evidence that the laboratory results can be translated into practical and reliable protection from field frosts.

Among the latest technologies to prevent frost damage the use of heating cables, artificial fog machines and insulating organic material are still in an ‘experimental phase’ or are little used.