Preventing hail damages in the vineyard 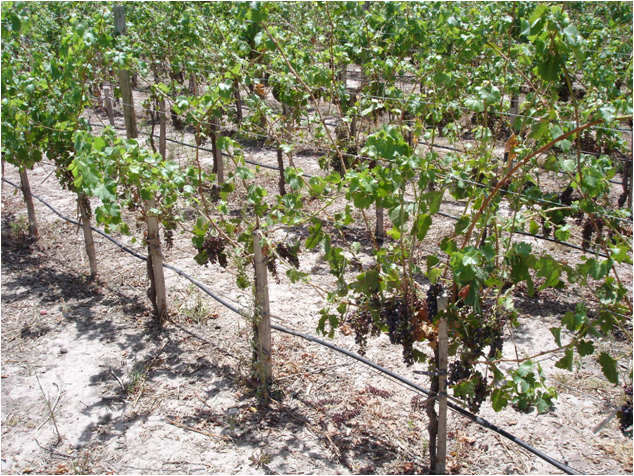 In viticulture, hail represents a considerable risk: it can cause significant economic damage to vine production even with a single annual event and the consequences can have an impact on growth and yield for several seasons. The degree of injury depends on the intensity and duration of the event as well as the vegetative stage of the vine. It is difficult to control this natural phenomenon, and nowadays the techniques that can be successfully applied  are substantially limited to the physical protection of the plants by specific nets. An important factor, which has changed a lot in recent years, is the effectiveness of weather forecasting, which is essential for a timely action.

This is the only method of proven efficiency. It is a synthetic thread net woven with a mesh that allows the sun and treatments to pass through, from a height of 0.5 to 1 m, placed on each side of the rows of vines. There are several systems for fixing and facilitating the handling of nets (spreaders, reels, lifters). The installation is done before bud break and a system of straps to raise the sausage net at the top of the trellis can be installed. This is important in order to be able to carry out work such as disbudding, leaf stripping or green harvesting. It is a technique still little applied in viticulture because it has only been authorized by the INAO for AOCs since 2018. Installation is expensive, between 15,000 to 25,000 € / ha, and requires additional labor for installation, but also for work on canopy  afterwards. However, it facilitates the growth of branches and thus limits the working time for leaf removal. Tests carried out in the Burgundy vineyards have shown a 90% reduction in damage to vines protected with netting. Furthermore, the impact of the fillets on the characteristics of the wines is not significant.

Especially in the past, some “active methods” were proposed. First in time was the ”acoustic wave cannon”, dating back to the end of 19th century. The effect would be the physical breaking of the forming hailstones by the effect of the acoustic wave generated by the blast. These guns operate on a mixture of explosive gas (acetylene or butane). Despite this method has been proven to be totally useless in hail protection, also according to the World Meteorological Organization (WMO), there are still some companies that propose these items to farmers.

The same physical concept was used to devise the “exploding rockets”, to be launched directly into the clouds soon before the expected hail fall. This method seems to be completely dismissed nowadays, even if its viability might be – in principle – better than the hail cannon; but the difference stands in the impossibility of farmers to launch rockets by themselves, on the contrary of what can be done with the use of hail cannons, and the obvious reluctance of public bodies to implement methods that don’t have any chance of success.

A better scientific reliability was given to the method of the so called “competitive growth” of hailstones, to be induced by a high number of glaciation nuclei artificially introduced into the cumulonimbus clouds; the formation of a very high number of small hailstones would avoid the formation of the bigger ones, that are responsible for the damages when they reach the ground. The techniques used to reach the atmospheric layers where the hailstone formation takes place can be different: ground burners, aircraft seeding, rockets or balloons used as vectors. The most widely used substance is silver iodide, but also others, like dry ice, were tested.

However, these methods were partially abandoned since the late 70’s, after the result of the so-called “Grossversucht IV”, a joint project with the participation of France, Switzerland and Italy. The experiment missed to show the statistical demonstration of the effectiveness of the “Soviet method”. Many of the national projects on the use of that method were discontinued. Nevertheless, the techniques continued to be in use in many countries, sometimes following local or private initiatives, especially in Eastern Europe for many years, and some institutes claimed its validity. The family of seeding methods gave place to the following techniques.

This type of protection works by generator networks. All generators consist of a compressed air cylinder, an acetone and silver iodide tank and a combustion chamber. The compressed air is used to pressurize the mixture of acetone and silver iodide to convey it to the combustion chamber where it is sprayed by a nozzle. All it takes is a lighter to ignite the acetone and drag the silver iodide through the air. The silver iodide then acts as an ice nucleus, the goal being to increase the number of hailstones to the detriment of their size to promote their melting before they reach the ground. The investment is important. It takes 2,000 euros for the installation of the chimney and 1,000 euros of products each year.
Different associations of winegrowers have been created to set up generators and manage their maintenance. This made it possible to reduce costs between 5 to 8 € / ha and to cover larger areas. Each generator is started by volunteers, who receive alerts by text message, approximately 4 hours before the risk of hail, established on the basis of Météo France forecasts, so that the clouds are loaded with silver iodide.
In terms of effectiveness, according to ANELFA (national association for the study and fight against atmospheric plagues), the device makes it possible to halve the intensity of hail. Recently, this method has been suspected of polluting the soil. Studies are in progress.

One of the latest inventions against hail is an inflatable balloon for transporting and diffusing hygroscopic salts (calcium and sodium chloride) in a storm cell. This device is coupled with a storm cell detection radar and software hail fall risk assessment covering a radius of 30km. A semi-automatic ball launcher has also been developed recently.
The balloons, inflated with helium, carry torches loaded with hygroscopic salts. Once the determined altitude is reached, a system ignites the torch. The salts are released and act as condensation nuclei favoring the formation of droplets. The objective is thus to make the cloud precipitate in order to reduce its average altitude and limit the conditions of formation of hail. The investment is quite important, you need an inflator for about 1200 €, three to six balloons per storm at 350 € each and a subscription to the detection service at 800 € / year. This system is still too recent to be able to assess its real effectiveness against hail.

This measure makes it possible, by projecting silver iodide into the cloud, to multiply the spindly embryos and to prevent them from reaching too large a size and therefore from acquiring a strong inertia during their fall. Just like the previous technique, besides the dangerousness of such processes which should not be neglected, its effectiveness appears to be very uncertain.

There are mainly 2 insurance contracts that cover hail risk: a “historic” hail-storm contract and a more recent multi-risk weather insurance contract subsidized by European funds. Insurance is one way to limit the economic impact of a devastating episode. The deductible is deducted from the total amount of crop losses in the event of a claim. For winegrowers located in regions frequently affected by hail, the insurer can refuse the renewal of the insurance policy. In the event of damage in the spring, the expert should be speeded up because the development of the canopy tends to mask the damage. On the contrary, for summer hailstorms, as white burp (Pilidiella diplodiella) damage takes time to appear, it is preferable to delay the arrival of the expert. Please, see the corresponding “solution card” on insurances for further details.

For a bibliography on hail protection campaigns (with focus on Italy, but not limited to it, and up to 1996), see the website of project ASTRO2. The list is in a chronological order  and addresses the issues discussed in this document
http://cma.entecra.it/Astro2_sito/pubblicazioni.asp